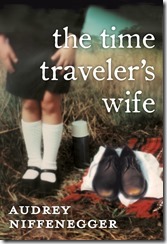 Henry DeTamble has a genetic disorder that causes him to spontaneously be thrust backwards or forwards in time. This causes many problems. Henry often finds himself naked in unfamiliar surroundings where he must steal clothes, money and food to survive. He often returns to the same places - sometimes at a particular date and time; sometimes at varying points in time. For example, he has witnessed the death of his mother in a car crash dozens of times.

Henry is drawn repeatedly to a home near Grand Haven, MI, where he meets a little girl named Clare. Henry and Clare develop a friendship over the years as Henry appears in her life at random times and at random ages of Clare's childhood. Eventually, the two meet in real time, where they fall in love and marry.

When Henry and Clare meet in real time, it is Henry's first encounter with her; yet Clare has memories of a relationship with an older Henry that spans to her early childhood.

The novel is written entirely in the first person, alternating between Henry and Clare's perspective - sometimes describing the same scene from each point of view. This gives us a good look at how Henry's disorder affects each of them differently and how they choose to deal with it.

The book is also written entirely in the present tense, as if they are narrating the events that are happening in their own timeline - wherever that happens to take them. This gives the story an immediacy and removes the certainty that either character will survive into old age.

Each chapter begins with the age of the characters who appear. Although Henry is 8 years older than Clare in real time, he is decades older in many of their encounters. Sometimes, Henry encounters a version of himself at different ages. The storytelling is necessarily far from linear. Often one character has memories of prior encounters that the other does not possess, which makes for an interesting dynamic.

The Time Traveler's Wife is one of the most imaginative novels I've read. In her first novel, Audrey Niffenegger has created both a science fiction story and a love story. As a time travel story, it covers the obligatory questions of free will, predestination, cause and effect, and the consequences of interacting with your own past. But those are secondary themes to the relationships of the people affected by Henry's sudden disappearances and appearances and the disruptions in their lives.

Much of the story covers how people deal with loss. Henry's father never recovers from the death of his wife; Henry deals with his disability by drowning in drugs, alcohol, and wanton sex - until he meets Clare, who inspires him to straighten himself out and live as normal a life as possible. Clare spends her life dedicated to and supporting Henry, even though he repeatedly disappears and she never knows if and when he will return.

I grew to care about this couple, who were blessed to be thrust together by destiny, but cursed by a unique affliction. Henry and Clare suffer through a relationship hampered by Henry's affliction and Clare's uncertainty; but they are held together by an honesty I found refreshing.

This was my second reading of The Time Traveler's Wife and it may not be my last.