The Wallflowers Finally Return to Chicago 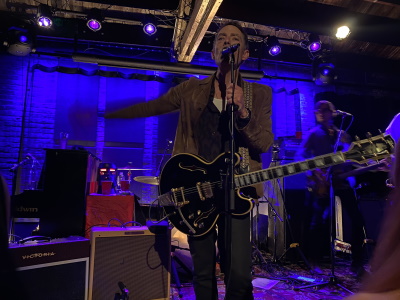 Jakob Dylan will never be the prolific songwriter that his father was. His father, of course, is legendary singer-songwriter Bob Dylan, who revolutionized popular music in the 1960s and won a Nobel Prize in the 2010s. But Jakob shares much of his father's songwriting talent and Bob's habit of building complex lyrics atop simple melodies. And, unlike his father, Jakob can carry a tune.

The younger Dylan is currently 52 years old and has been leading his band The Wallflowers for decades. Saturday evening, he brought The Wallflowers to the SPACE nightclub in Evanston for the first of two shows. The club was packed to see a band that typically plays much larger venues and the Wallflowers did not disappoint.

Dylan's music ranges from folk to rock to hymns to anthems to ballads and he played them all to the delight of the audience. He chatted with the crowd and made eye contact, something his father stopped doing years ago.

I have been to SPACE many times over the years. This was the first time they removed the tables and chairs and hosted a standing-room-only show. This was less than ideal, but it was likely the only way to entice this band to play in such a small room. Arriving early and standing by the stage provided a unique opportunity to relate to Jakob's emotions during the performance. He had the habit of picking out someone in the audience and singing directly to them during each number.

The audience loved hits like "One Headlight" and "6th Avenue Heartache", as well as a rendition of Tom Petty's "The Waiting", but the band performed every song with enthusiasm and received with pleasure.

If I had one complaint about the show it was the lack of lighting on the stage. Some musicians remained in shadow the entire set and no spotlight shone on anyone - even on Dylan.

Local artist Nathan Graham was an excellent choice as a warmup act, performing his original soulful melodies while accompanying himself on guitar.

I originally bought tickets to see The Wallflowers at SPACE in 2011; but an illness in the band forced them to cancel that show. Fortunately, they rescheduled over a year later and I was able to see them for the first time.

It was worth the wait.