"The Wishsong of Shannara" by Terry Brooks 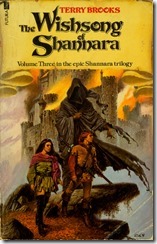 I don't think I am the target audience for the writings of Terry Brooks.

The plot lines and characters of his Shannara stories are borrowed almost whole from JRR Tolkien's Lord of the Rings and The Hobbit.

There are elves and dwarves and men living in Brooks's world; and there are magical talismans with the power to seduce those who possess them and to identify the possessor to the dark lords who covet them; and there are quests to save the world from evil, powerful sorcerer and his army of demonic beings; and there are at least 2 creatures who talk like Gollum.

I think Brooks's books are aimed at teens and young adults who have not yet experienced Tolkien and maybe aren't ready for something as heavy as Middle Earth. Brooks is not nearly as good a writer as writer as Tolkien (who is?); but his narrative is simpler and more straightforward, making it accessible to those who are new to high fantasy. It's a good gateway into this genre.

I enjoyed this trilogy enough to complete it, but not enough to read any more books that Brooks has set in this universe. This is a good introduction to high fantasy for those who want something light and easy to read. If you are already a fan of the genre and have read some of its masters, you are likely be disappointed.