"Their Eyes Were Watching God" by Zora Neale Hurston 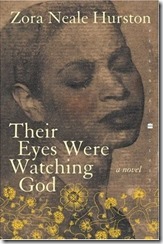 Until this week, I was unfamiliar with Zora Neale Hurston or her 1937 novel "Their Eyes Were Watching God".

This is the story of Janie Crawford - a black woman growing up in Florida in the early 20th century. Janie is the product of a white man raping her mother and her mother is the result of the rape of Janie's grandmother by her plantation master.

It is a full generation following the emancipation of slaves in America, but the poor, uneducated blacks of the region are still far from equal. This book reminds us that they had stories to tell and people to love and lives to lead.

As a young girl, Janie hoped for love. As a teenager, Janie's grandmother arranged her marriage to an older man, hoping to avoid the tragedies of the last two generations. This marriage fails and her second husband dies, and she marries a charming gambler, who is much younger than her. Their life seems good until a flood and a rabid dog attack disrupts it.

Her first two husbands treat her as a piece of property. Only her third husband gives her the love she desires. He is far from perfect, but he accepts Janie as a person.

We cannot escape the racial overtones in this novel because most of the characters are black and are living in a white-controlled society. But the book is more about gender roles and the relationship between men and women than about race. Janie searches for love but ends up being controlled by the men in her life. The black men of this story are controlled by the white men; and they take out their frustration by controlling their black women.

Hurston strives to make the dialogue authentic, including poor grammar and phonetic (mis)pronunciations, which can make this book a challenge to read. But this adds to the color of the story. And I happened to choose the audiobook, read by Ruby Dee, who did a masterful job.

"Their Eyes Were Watching God" is a story of strength and endurance by a woman seeking love and affirmation and survival. Janie is human but heroic. She asserts and defends herself while surviving in a world she does not control. Ultimately, she succeeds in living her life by her own rules.