They Might be Giants and they Definitely are Fun 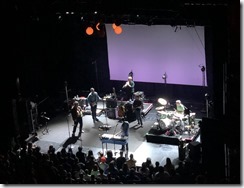 It has been 30 years since the release of "Flood" - the breakthrough album by iconic nerd-rock band They Might Be Giants.  To celebrate, the band is touring the United States, vowing to play every song from this album at each show.

Friday night, they played The Vic Theatre in Chicago to a sold-out audience that braved the cold weather and threats of coronavirus to cheer on the kings of the 2-minute song.

For almost 3 hours (including an intermission), TMBG rocked the Vic while the audience sang along to songs they grew up with.

Few bands have the kind of cult following enjoyed by TMBG. TMBG has never had a top-40 single and only a handful of their songs have cracked the alternative rock charts. But their audiences love them and flock to their concerts and memorize their lyrics.

Technically, TMBG consists of only two members: John Flansburgh and John Linnell. But, for this tour they were joined by 3 others to fill out their songs. Linnell looks like a computer science student and Flansburgh looks like Linnell's dad. The point is that both project nerdiness - in their appearance and in their music, which consists of cerebral lyrics, catchy melodies, and experimental electronic sounds. And a trumpet.

In addition to performing every song from "Flood" (in no particular order), the band played numerous songs from their 22-album catalog.

They even played one song ("Sapphire Bullets of Pure Love") backwards!

I've been listening to TMBG since their "Flood" days and this is the first time I've seen them in concert. I was lucky to get a ticket to this sold-out show from someone selling his last ticket outside the venue. I'm so glad I did.