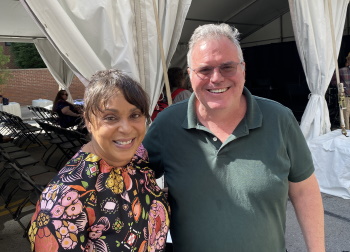 I recently met Natasha Trethewey. She spoke at the Printers Row Lit Fest near my home, and she was kind enough to pose for a photo with me after her reading. When I heard she was coming, I knew I had to read some of her work before seeing and hearing her. I began with "Thrall" - a 2012 collection of poems about life and death and race and art.

She opens with an Elegy to her father - a memory of the two of them fishing together when she was a young girl, and her parents were still married.

Some nights, dreaming, I step again into the small boat that carried us out and watch the bank receding— my back to where I know we are headed.

The title is misleading as it was published two years before her father's death, but it captures beautifully her relationship with the man who gave her life.

She returns to her father and her mother multiple times in this collection, mostly remembering them separately, as they divorced when she was six. Despite their brief time together, one must believe that the marriage between a white Canadian and a black Mississippian had a powerful impact on their daughter growing up in Mississippi at a time when interracial marriage was illegal in that state. Another incident that impacted young Natasha was the death of her mother - murdered by her second husband when Natasha was 19 years old.

Trethewey writes of death, but it is not always sad. Trethewey's poems radiate hope and a fondness for the life that once was - fishing with her father; or her mother pulling young Natasha from the water as the nearly-drowned little girl sees "sun, a corona of light around her face".

In between, Trethewey authors poems inspired by art - mostly art depicting blacks and mulattos and whites interacting in colonial settings. Of course, I had to look up the paintings that inspired these poems and shift my gaze between the words on the page and the image on my computer.

"Thrall" was published just as Trethewey was named Poet Laureate of the United States - a position she held until 2014. The emotion in this volume shows why she was granted such an honor.