When we lost David Bowie to liver cancer in 2016, we lost one of the most innovative musicians of his generation.

Friday night at the Copernicus Center in Chicago, a group of musicians tried to recapture and pay tribute to Bowie's innovation and genius. 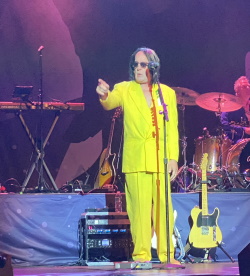 The "Celebrating David Bowie" tour was organized and hosted by producer/guitarist Angelo "Scrote" Bundini. Scrote organized an all-star cast of musicians, highlighted by Todd Rundgren and Adrian Belew. Among his many accomplishments, Belew worked with Bowie on multiple occasions as a session musician, touring musician, and musical director. They were joined on stage by Spacehog's Royston Langdon and Fishbone's Angelo Moore. Rundgren, Belew, Langdon, and Moore alternated singing lead vocals on 30 David Bowie compositions, while the others backed them up, accompanied by a talented core of Ron Dziubla (saxophone, keyboards), Angeline Saris (bass guitar), and Travis McNabb (drums).

Belew stayed mostly in the background in his white t-shirt and ruby slippers, while the other three vocalists changed costumes between songs and strutted across the stage with extra flamboyance when they sang lead. It was a presentation reminiscent of Bowie himself.

As a special treat, former Bowie backup singer and girlfriend (and Chicago native) Ava Cherry joined the band for a few songs. 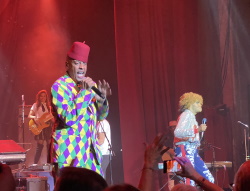 The band played many of David's biggest hits, including "Young Americans", "Fame", "Golden Years", and "Space Oddity". Unsurprisingly, they played "Pretty Pink Rose" - a song co-written by Belew and Bowie which the two originally performed as a duet on Belew's "Young Lion's" album. The show reached a climax with energetic back-to-back-to-back renditions of "Let's Dance", "Rebel Rebel" and "All the Young Dudes". Moore stepped off the stage into the audience to dance with crowd members and climb across the top of the chairs, without missing a beat or note in his singing.

For the encore, they pulled a dozen audience members onto the stage and danced with them to "Suffragette City" before closing with art rock anthem "Heroes".

I do not usually enjoy tribute bands, preferring to see the original artists when possible. This was an exception. I was already a fan of Belew and Rundgren, I appreciated the connection many of the performers had with David Bowie, and I recognized the enthusiasm they poured into the evening's performance.