Tom Harrell Plays on Through It All 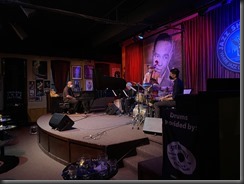 Tom Harrell was born before the founding of Jazz Showcase, the southside club at which he performed Saturday night. Harrell looks every bit of his 75 years. He is old and frail and incapable of sitting erect in his chair. But he can still play, and his playing is still impressive.

Harrell has played with Stan Kenton, Woody Herman, Dizzy Gillespie, and a host of other jazz legends over the years; and he still loves the music enough to climb onto a stage and lead his quartet for two sets. The quartet was a terrific set of talent that included Ugonna Okegwo on bass and Adam Cruz on drums. But it was Venezuelan pianist Luis Perdomo who stole the show with his outstanding technique and solos.

Highlights of the evening included "Sea", a beautiful melody, which Harrell dedicated to the late Joe Siegel, who founded Jazz Showcase three-quarters of a century ago; and his version of John Coltrane's classic "Moment's Notice".

Although there was not much visually to the performance, the music was enough to satisfy a full house.