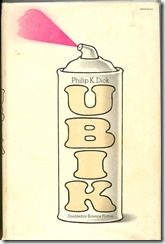 Death is very different in the universe of Philip K. Dick's Ubik. Rather than simply ending life or transitioning to an afterlife, the recently dead remain cognizant. If properly preserved, technology exists that allows the living to communicate with the dead - sometimes for years. The consciousness slowly decays over time, after which the deceased finally cease to exist or are reborn anew.

Psychics are common enough in this universe to keep Glen Runciter busy. His company specializes in protecting people from psychic intrusion.

A group of powerful anti-psychics, led by Runciter, travel to the moon to meet with a potential client, where they are attacked and seemingly hurled back in time to the year 1939. But not everything is like the 1939 of their own past and they wonder exactly where they are.

Runciter is a good man and so is his employee Joe Chip. Chip is the perfect hero. He is loyal to his employer and dedicated to finding the truth; but he is financially irresponsible and always lacking funds (a problem when every appliance, device, and door requires a cash fee before it will operate).

Ubik is an imaginative tale of action and drama and speculative science fiction. Dick does an excellent job of taking far-fetched ideas and making them seem plausible. In under 250 pages he builds an entire world; then, destroys that world and creates another.

The story is both dark and humorous.

This novel influenced science fiction for many years after its 1969 publication. Douglas Adams must have read about the annoying talking doors when he wrote them into his Hitchhiker series. At times, we see nested realities, in a way that echoed in the 2010 film "Inception".

The narrative keeps changing our expectations. He keeps us guessing about reality versus illusion and life versus death and past versus present. And that's just the way Philip K. Dick wants it.