"Under the Volcano" by Malcolm Lowry 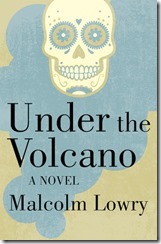 Under the Volcano by Malcolm Lowry takes place almost entirely on a single day - The Day of the Dead in Mexico. It is the day that Geoffrey Firmin's estranged wife Yvonne returns after a year apart, in an attempt to save their marriage. But it is too late. His current relationship with alcohol has replaced his previous relationship with his wife.

It is the last day of Geoffrey Firmin's life.

Geoffrey misses and loves his wife, but he destroys his chance, spending the entire day in a drunken haze, sliding into self-destruction. He is clearly a high-functioning alcoholic and he tests this by drinking more and more as the day goes on.

The novel gives us a look into the mind of Geoffrey, his wife, his brother Hugh, and his old friend Jacque. We get a peek into their actions and memories, and (in the case of Geoffrey) hallucinations. It gives us a look at the problems of substance abuse and the denial inherent in those who suffer it.

Beer, whiskey, tequila, and mescal lead the protagonist on a downward spiral. We know where it ends; but, like a highway accident, we cannot look away.

The title refers to the two volcanoes that loom above the central Mexican City of Quauhnahuac, where the action takes place; but, also to all the unspoken conflict below the guilt and anger felt by the main characters.

Those who know me well will know what memories Geoffrey's behavior triggered in me. In Geoffrey, I saw a version of myself in a period of my life when I embraced the pain inflicted by another, rather than attempting to heal my wounds. Fortunately, I emerged from my self-destructive behavior and recovered (mostly).