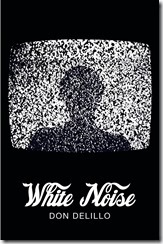 Jack and Babette have an idyllic, if unconventional life. Jack is a professor at a small midwestern college, whose Hitler Studies program has proved enormously popular. The major is so popular that a colleague is building a similar curriculum around Elvis Presley in addition to a course about car crashes in movies. Babette has a successful career reading tabloid stories to blind people.

They live in a nice house near campus with four children from their numerous previous marriages. They are a little too obsessed with death, but what of that?

Things start to disrupt when Jack is exposed to toxic fumes that descend on their town - an incident that brings him closer to the death he fears.

Babette learns of a pill that claims to cure death anxiety, but the only source of this pill will only trade it for sex. She concedes and Jack takes the affair in stride when he first learns of it; but later plots violent revenge.

White Noise by Don DeLillo is a surreal book. From absurd pop-culture college majors to the unexplained "toxic cloud" to unlikely medicines to the children who seem more mature than their parents to the ex-wives with even quirkier personalities than Jack and Babette's family.

DeLillo makes it work, thanks to his gift of humor. His dialogue is often inane, but funny. And he throws the reader off by including unrelated details in many scenes, such as describing the shoes a character wears or relaying what is heard on the TV in the background.

White Noise is an enjoyable satire and a good read.