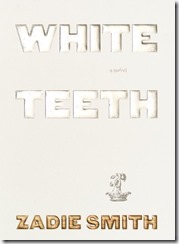 White Teeth by Zadie Smith follows the lives of old friends Archie Jones and Samad Iqbal. They met when serving together in a tank in World War II, where they got lost, missed the end of the war, and sentenced a war criminal to death; they remained friends; married much younger women; had children; worked menial jobs in north London; and spend their free time in a filthy pub drinking beer and eating greasy food.

But they are very different. Archie is English and simple and easygoing; Samal is a fiery and opinionated Bangladeshi immigrant, who wants his family to maintain the traditions of his homeland.

Samal is so troubled by the English influence on his family that he sends his son Magid back to Bangladesh so he can learn his ancestral ways.

The plot becomes more complex as Smith introduces more characters and tells their backstories and their lives become more and more intertwined. In addition to Archie and Samad, she gives us:

Clara: Archie's young Jamaican wife, who is trying to escape the influence of her Jehovah's Witness mother.

Alsana: Samad's wife. She never forgives Samad for sending away their son.

Millat and Magid: Twin sons of Samad and Alsana. They grow up with very different personalities. After Magid is sent to Bangladesh, Millat turns to a life of pot-smoking and womanizing for a few years, before embracing Islam. Magid rejects religion and embraces intellectualism.

Irie: Archie and Clara's daughter. She is intelligent but lacks self-esteem and has a hopeless crush on Millat.

The Chalfens, an intellectual, liberal, well-meaning, dysfunctional family, who try (sometimes successfully) to mentor the Jones and Iqbal children.

There are other characters, and each has their backstory and their quirks, but the narrative revolves largely around the characters listed above. The book often jumps around in time to reveal the backstories of each character. But it does so succinctly and successfully. In the end, all the characters end up in the same room with different goals and an unexpected result.

Smith explores several conflicts including the struggle between immigrant assimilation and tradition to the role of race in society; the difficulty of parents and children to understand and relate to one another; and the meaning of religion in individual lives. She does so with a good story and with a witty prose, as in the following:

"Oh he loves her; just as the English loved India and Africa and Ireland; it is the love that is the problem, people treat their lovers badly."

White Teeth is one of the best novels I've read this year.