Here's something I just learned.

You can take a screen capture of a your Windows 8 phone by simultaneously pressing the Windows Home key (at the bottom center, on the front of the phone) power button (at the center of the right edge on my phone). When the screen is captured, you will hear the sound of a camera shutter, similar to when you take a photograph. For me, it usually takes several attempts in order to hold down the buttons simultaneously. 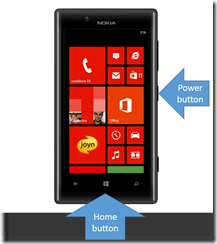 After you take the screen capture, you will find the captured image in the phone’s Photos application – in an album titled “Screenshots”.