A Soggy Day in London Town 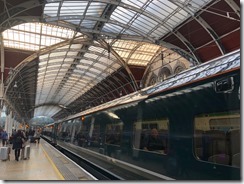 I was in a period of transition last week when the account rep asked if I could travel to London Monday to meet with a customer. A re-org had been announced a few days earlier and I had not yet met my new manager. Following numerous e-mails, meetings, and calls, it was decided I should make the trip. So, I found myself on Thursday afternoon purchasing an international ticket to leave for England Saturday afternoon.

Many who know me are surprised I had never visited the UK, given the amount of travel - both domestic and international - that I've done the past few years. But I was excited for my first visit.

I arrived at London's Heathrow Airport early Sunday morning, expecting to spend the day exploring the city. Unfortunately, a sleepless transatlantic flight meant that I spent much of the day in bed. I did manage to connect with a couple expats living in London, so I had lunch with James, who moved here from Ohio a few months ago; and dinner with Tobiasz, who moved to England from Poland a couple years ago.

On Monday, I also managed to connect with Andy, whom I had known for a few years from our participation in the IT Camp in Transylvania. He joined me for lunch, where I experienced  the delight that is English meat pie. 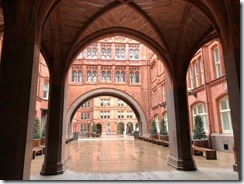 It was good to see friendly faces in a foreign country. But I came here to work, so I met with the customer Monday, where we successfully brainstormed potential projects on which we could work together. It was good that I came, and I went to dinner with a couple other Microsoft folks afterward to experience the delight that is fish and chips and English beer in an English pub. 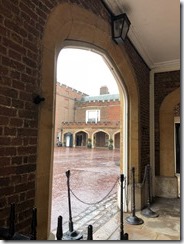 I had Tuesday to myself, so I opened the day with a guided walking trip around London. The tour was well worth my time and money. Sights included Buckingham Palace, St. James Palace, St. James Garden, Covent Market, and Trafalgar Square. Robin, our tour guide did an excellent job of combining humor and history. The rain began to fall as we began the tour and steadily increased in intensity until we ended 3 hours later in a downpour at Westminster Abbey. A hot meal in nearby pub took the chill off nicely. 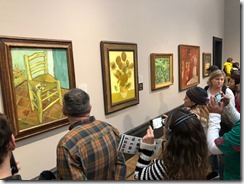 With a full belly, I decided to visit the National Gallery, where I saw works by Van Gogh, da Vinci, Bruegel, Cezanne, and others. Like most museums in London, the National Gallery offers free admission, with a suggested (but not required) donation. I could easily spend an entire day at the Gallery, but a couple hours sufficed on this day.

I walked around the city about more, passing through Leicester Square and Chinatown before heading back to my hotel.

My new manager is based in the UK, so he drove to London Tuesday evening and I had a chance to meet him face-to-face for the first time.

After we parted, I decided I needed to experience one more English beer in one more English pub before checking in for my final night and my flight home. I chose the White Hart, which bills itself as "The Oldest licensed premises in London", where I sat in a corner, sipped a lager, and read a couple chapters of "Brideshead Revisited".

It was a whirlwind trip, executed in a short time with a minimum of planning, but it was well worth the effort. I hope to return soon.