Creating and using a MinIO Gateway for Azure


MinIO is an object storage system, similar to Amazon S3 or Azure Blob storage. It is built on top of Docker containers, which makes it easy to scale.

In a previous article, I showed you how to create and use a MinIO Server.

In this article, I will show how to create and use a MinIO Gateway for Azure Blob Storage.

A MinIO Server stores files and objects. By contrast, a MinIO points to some other storage repository where the files are stored. However, it allows you to interact with those files as if they were stored in MinIO.

Before you begin, you will need to install Docker Desktop, which you can download for either Windows or Mac.

In the Azure Portal (https://portal.azure.com), you can find the storage account name at the top of the Resource page, as shown in Fig. 1.

You can find the key on the "Access Keys" blade, as shown in Fig. 2. 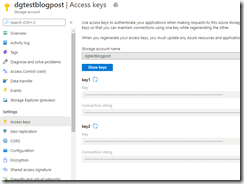 Note that there are two keys. Either one will work. Click the [Show Keys] button to view the keys and allow copying to your clipboard.

A MinIO Gateway for Azure is created with the following command:

After a successful login, the MinIO Gateway user interface will display, as shown in Fig. 4.

Note that this looks exactly like the MinIO Server user interface, described in this article.

In fact, you can create buckets and manage files in a MinIO Gateway exactly as you would in a MinIO server. The only difference is that the objects you manipulate are stored in the corresponding Azure Blob storage, rather than in MinIO. Each bucket is mapped to a Blob Storage container and each file is mapped to a blob.

In this article, you learned how to create a MinIO Gateway for Azure.