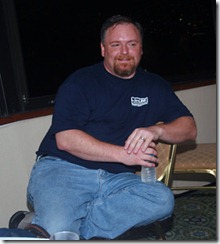 Sitting in the hotel bar last night, surrounded by geeks from around the country, I realized that I did not want DevLink to end. We all came to Nashville to exchange ideas and to learn a little more about our profession.

John Kellar – a Nashville resident until a few weeks ago – is the driving force behind the DevLink developers conference. With the help of a group of volunteers, he puts on an amazing conference that brings together a diverse group from the IT industry. People with a variety of roles, focusing on a variety of technologies traveled from all over North America.

I was scheduled to deliver only one session – Communication in the Workplace – an expanded version of a presentation I gave last year at the Kalamazoo X conference. I delivered it Saturday morning and was pleased with the reception it received. My main message was that you should be proactive in seeking frequent feedback from your manager, in order to improve your performance and raise the perceived value of your work. The slides are below.

After arriving at DevLink, I also arranged for a panel discussion on Finding a new Job in the IT Industry. I moderated a panel that included John Kellar, James Bender, Jay Harris, Diane Sanders, Jeff McWherter and Todd Anglin.  The panel participants did such a great job articulating ideas about the how to approach a job search. Everyone agreed on the high value of networking, but there was a spirited debate on the value of a college diploma.

The last few conferences I’ve attended, I have favored open spaces and hallway conversations over the more traditional “eyes-front” presentations. This one was different for me. At DevLink, I attended five sessions (other than my own two). A brief summary is below.

The Rich Standards: Getting Familiar with HTML5 by Todd Anglin.

This was an eye-opening session for me, showing a look into the emerging standards of HTML 5. The next version of HTML promises more semantic markup, making web pages more accessible to search engines and to screen readers. It will also provide native support for audio and video. Some HTML5 features have already been adopted by some of the major browsers.

NHibernate and Friends by Lee Brandt

In this introductory presentation, Lee ran through the basics of NHibernate, Fluent NHibernate and LINQ to NHibernate. He also explained why why he chose this stack over other ORMs (earlier adoption of key features), the conventions that NHibernate expects and how to configure NHibernate when your data and objects deviate from those conventions.

Getting Started with Entity Framework 4 by Dane Morgridge

This presentation assumed no prior knowledge of EF and walked the user through the creation of a data layer in less than an hour. I really liked the simplicity of the presentation and the demos. Don’t tell Dane, but I may borrow some of his ideas for an EF presentation I am developing.

The conference ended with a compelling lecture by Ted Neward, who warned of the changes to the American software industry and recommended that we set our vision higher and redefine our own roles in this industry. He refers to those who have blazed new trails in other areas as iconoclasts. 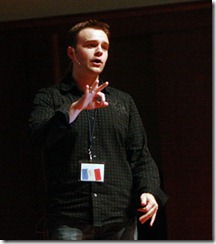 It’s hard to define why this conference is such a success. Sure, there are many great speakers and the attendee can sometimes choose between a dozen different sessions at a given time. But there are also open spaces and hallway conversations from which to learn. And, because so many of us stayed in the recommended hotel, there were numerous opportunities in the evening to meet smart people.

The attention to detail by the organizers added to the event’s quality. From the excellent speaker dinner to the hand-written Thank You notes given to each speaker, everything contributed to the quality of the conference.

If there is a DevLink next year, it is already penciled onto my calendar.