Exploring Chicago neighborhoods one latte at a time

I moved to Chicago in 2014. Although I had spent a lot of time in this city prior to my move, much of Chicago was a mystery to me. I knew a few square miles of the Loop and the area just to north of the Loop; and I was sure I would become familiar with Old Town, where I rented an apartment.

But Chicago has 77 Community Areas and over 200 neighborhoods. And I knew little or nothing about most of them. I wanted to get to know them better.

My first thought was to take some time driving around the city - either randomly or in an organized pattern, but that would have given me only a view from my car and no taste of the actual neighborhoods, so I rejected this idea.

One day, I happened upon a list of the best coffee shops in Chicago.  Those who know me, know my fondness for fine coffees and will not be surprised that I was drawn into this list.  I formed a plan.

I decided to visit each coffee shop on the list and use this journey as a way to explore the neighborhoods of Chicago. Every cafe except Hard Boiled Coffee offered a latte on its menu, so that’s what I ordered. Sometimes I accompanied the caffeine with food. Mostly I went alone, but my brother Dan and I visited 2 places in Pilsen when he was visiting from Australia. I also visited a few places that were not on the list but that were close to my home or where I happened to be on a given day.

The coffee shops themselves were just a means to an end. My goal was to see the city.  While visiting each cafe, I was able to also visit a new neighborhood and absorb its charm. I experienced the family atmosphere of Ravenswood and the bustle of Wicker Park. I spent time walking around the Mexican culture of Pilsen and the stylish area of Boys' Town. I found areas filled with artists, with rushing businessmen, and with working class people.

As for the cafes themselves, the decor ranged from the simplicity of Big Shoulders Coffee to the hodgepodge of Jackalope Coffee and Tea. A giant cat painted on a garage door looms over the backyard of Dark Matter Coffee at the Star Lounge, while I found a man repairing a bicycle in the back of the Heritage General Store. I don't have a favourite coffee or cafe, but I will say that all were good and I would recommend any of them.

If you decide to make this same journey, be aware that 2 of the coffee shops on the list (Bad Wolf Coffee and Knockbox Cafe) have closed and that Hard Boiled Coffee now exists only inside the Horse Thief Hollow Restaurant in Beverly. 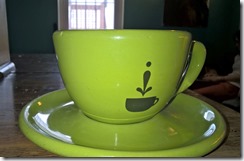 And I feel now like I know Chicago a little bit more for having experienced her neighborhoods.

I'm still deciding what my next urban journey will be. I may explore the top Chicago Style Hot Dogs.