Fired Up About Ignite

The first Ignite conference was not what I expected - at least my experience was unexpected.

Ignite is a a new conference that  replaces Tech Ed North America and a few other national technical conferences. In its inaugural year, it was scheduled at the McCormick Place convention center in Chicago, which was lucky for me because I recently moved to Chicago.

I wanted to attend and I tried everything I could think of to get a ticket to Ignite (short of actually buying one, of course); but I had resigned myself to watching from the sidelines. However, the evening before Ignite began, I received an email asking if I could work the Office 365 booth at Ignite. I accepted and was excited to attend. I spent Sunday night learning all I could about Office 365,

I was overwhelmed by the interest in Office 365. The steady stream of attendees did not trail off until Wednesday afternoon. Serving 5 hours a day on booth duty made it difficult to attend any sessions before Friday morning; but I did get a chance to explore the Expo area, where dozens of companies and organizations showed off their products and services.

The Expo ended Thursday, so I was able to attend a few sessions on Friday. I saw presentations on Windows 10 management, ASP.NET 5, and Automated Testing.

By one measure, I missed much of the conference because I wasn't able to attend any sessions Monday through Thursday. But I spoke with a number of smart people in the Expo Area and exchanged quite a few ideas, which was a big success. And I was forced to ramp up quickly on Office 365 development in order to perform my role as a booth babe. They even let me wear a shirt with the word "Expert" on the back.

Overall, I learned a lot this week, which is the primary reason I attend these concerts. Oh, and also Fall Out Boy. The Fall Out Boy concert Thursday night was pretty good. 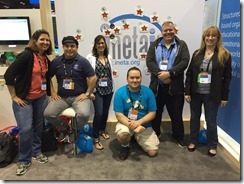 Current and INETA board members at the Ignite Expo 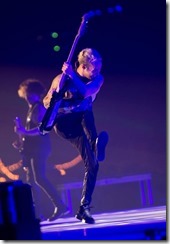 Fall Out Boy in concert at the Ignite conference