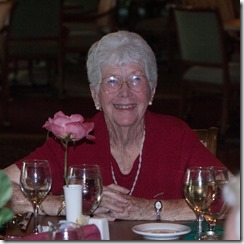 My mother - Joyce Ann Gill Giard - had a lot of idiosyncrasies.

There were phrases she would repeat often. "and what not" meant she could not think how to complete her current thought; "so anyway" meant she was ready to leave; and "You're special" meant that she wanted to say something nice about you but could not think of anything specific.

There was her inability to tell a story properly. So many times, she would tell a nonsensical punchline; then remember that she had forgotten an important bit from earlier in the story.

And there was her habit of re-telling the same story to us, as if we hadn't heard it a hundred times already - maybe just yesterday. Maybe earlier in the same conversation.

We used to make fun of my mother for these idiosyncrasies. We would smile, and roll our eyes, and we would laugh about it later.

But I began to rethink this attitude a few years ago. That was when my mother's life was struck with a series of tragedies.

It began when my father - Norm Giard - was diagnosed with skin cancer. He recovered, but it cost him his entire nose, which had to be rebuilt.

Next came the following events, which happened in rapid succession. 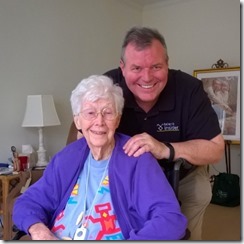 It was her loss of hearing and memory that my mother found most frustrating. Mom was a very social person. She loved people; she loved spending time with her friends; and she loved to start conversations with strangers. I was once driving her around our old neighborhood when she spotted the current owners of our former home. I had not fully stopped the car before she had opened the passenger door to get out and introduce herself.

As her memory faded, she found it difficult to recall the names of close friends and how she knew them. She once called me in a panic because she could not remember where she had met my father.

When she lost her hearing, she found it nearly impossible to engage the new people she met. And when she moved into an assisted living facility in Michigan, everyone was new.

It was this string of tragedies and the dignity with which my mother faced them that caused me to re-think her and my behavior around her. Her idiosyncrasies became for me unique aspects of her personality, rather than a reason to roll my eyes.

I would visit her, and she would tell me "You're special" and I would respond "No. *You're* special!".

She would tell me a story I've heard before and I would listen and nod as if I were hearing it for the first time.

And I laughed at her jokes.

These struggles and these tragedies did not break her. I admire that she maintained a positive attitude and a strong faith throughout all this. She did not blame anyone for her fate. And she remained positive that she would eventually be reunited with her husband and daughter.

We still sometimes laugh at my mother's idiosyncrasies; but now we do so with the appreciation that these are the things that set her apart; that made her unique; that made her the woman we loved.

Joyce Ann Gill Giard passed away last week at the age of 84. Yesterday, I returned from her funeral in Florida.

If she were here with me right now, I would tell her in no uncertain terms: "You are special!"