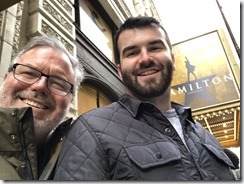 Combine a history lesson with great music, great dancing, and a very talented cast and you begin to understand "Hamilton". The extremely popular Broadway musical has been playing continuously at Chicago's CIBC Theater for over two years, and I finally saw a performance Sunday afternoon.

This hype for this show was considerable, but Sunday's performance was up to matching it.

The show's story focuses on the friendship and rivalry between Alexander Hamilton and Aaron Burr. Both were major figures in early American history. Hamilton was the first Secretary of the Treasury, who built the U.S. financial system. Burr was a Senator, a state Attorney General, a Vice President and (spoiler alert) the man who killed Hamilton in a duel.

Some actors got the day off for this matinee performance - most notably, JJ Jeter for Miguel Cervantes as Hamilton and Keith Webb for Akron Watson, but I would not have known I was seeing understudies without looking at the program. Jeter and Webb captured the spirit of their characters - Hamilton's idealism and Burr's ambition - perfectly.

A high point of the interpretation was the character of Thomas Jefferson, who was portrayed as a cocky Prince clone, returning from Paris to set the new country afire.

One of the most interesting aspect of the Hamilton musical is that nearly every major part is played by a person of color - African-American or Latinx. George III was the only speaking role is played by a Caucasian. Of course, the leaders of 18th century United States were almost all white. But this change works well and fits the music, features a lot of R&B and Hip-Hop influences.

I bought tickets to treat myself to a birthday present and I invited my son to join me. We both enjoyed it immensely. I would not be surprised to see this show run for another 2 years in Chicago.