I Amsterdam (and so are you) 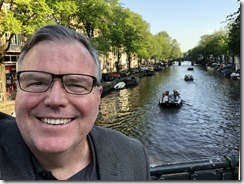 Last month, I visited Copenhagen, Denmark for the first time and thinking that I'd never seen a city as bicycle-friendly.

But Amsterdam has Copenhagen beat by far in this regard. During morning rush hour, bicycle commuters easily outnumber automobiles; and I was told that Amsterdam has more bicycles than people.

I was mostly on foot, but I kept my head on a swivel as I walked around town, looking one way for cars and in the other direction for bicycles each time I ventured across the street.

It was my first visit to Amsterdam, and I came to work at an OpenHack - workshop designed to teach a specific technology via problem-solving and hands-on experience. The OpenHack was a great success for everyone. Nearly all the feedback we received was positive and people seemed to appreciate my coaching and enjoyed a presentation I delivered on Azure Data Factory. In addition, I led two "Envisioning Sessions" - an exploration of a project a customer is considering that involves use of cloud technology. 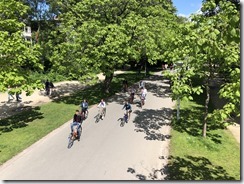 I arrived Sunday and spent most of the day resting before meeting up with Mike Amundsen, an old friend from Cincinnati, who happened to be in Amsterdam to speak at the GOTO conference.

The next two days consisted of hard work during the day, followed by dinners with my teammates in the evening. I made up for the rich food by walking around miles the city.

When the OpenHack wrapped up on Day 3, I headed over to the museum area and spent about an hour exploring the Stedelijk Museum of Modern Art, before meeting Brent and David at an Indonesian restaurant. The Indonesian food was amazing, consisting of samples of dozens of different dishes.

After dinner, Brent and I took a boat ride along the canals. It featured a pre-recorded guided tour of the city. Because the canals cover almost all of Amsterdam, we got to see nearly all the city in this way. 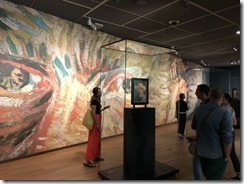 Friday I had to myself, so I bought tickets to 2 museums: The Van Gogh Museum, which features the works of the famous Dutch painter, along with those who influenced him; and the Rijksmuseum, which primarily features works of classic European artists from the Middle Ages to the present. It has a particularly impressive Rembrandt collection.

Friday morning, I had a special treat as I learned that Austin Haeberle - a friend I grew up with - was arriving in Amsterdam the same morning I was flying home. We had not seen each other in 30 years, so we met at the airport for breakfast and picked up where we left off.

If I had more time and energy, I could have spent days just exploring museums. I did not see the house where Anne Frank famously hid from the Nazis and wrote in her diary, nor the National Maritime Museum. I also did not get a chance to view Amsterdam's (in)famous Red-Light district. When I return, I will try to visit these places, as well as the rest of Amsterdam, which is a small enough country that one could drive across it in a couple hours.

The point is that I would love to return.