It’s the Year of the Cat again, thanks to Al Stewart 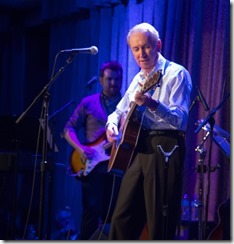 I was 16 years old when I got my first real job. The day I received my first real paycheck, I drove from work to the bank to local record store and bought Al Stewart's Year of the Cat LP. I took it home and played it repeatedly, memorizing every word of every song on both sides.

Nearly 4 decades later, I finally had a chance to see Al Stewart live - Thursday evening at the City Winery. And here's the kicker: He played the entire Year of the Cat album! Every song, in the same order as on the album. It was like getting a visit from an old friend. The concert transported me back to my teen years, listening to my LP on my parent's Wi-Fi at top volume in the family basement.

In between each song, Stewart explained something about the song's meaning or told a story of its origin. He was surprised that a song about the Rhodesian civil war (On the Border) would become a top 40 hit; All airplane metaphors in Flying Sorcery are about the ending of a relationship; Broadway Hotel often inspires each audience member to attempt to seduce the attractive stranger next to him or her.

Stewart was backed by the local Chicago band Empty Pockets, which also opened the show with a short set of their own. They were joined by Marc Macisso on flute, harmonica and saxophone - most notably saxophone which he wielded with power and passion.

The band played a few songs before and after the complete Year of the Cat set, including his other hit Time Passages. But it was the re-playing of the album that we all came to hear. And that we all enjoyed.

More photos of this concert