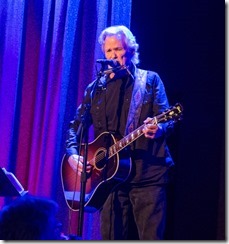 I took a chance. The show had been sold out for over a month. But I drove to the City Winery in the West Loop anyway. And I was rewarded with a ticket close to the stage. And I was not disappointed.

Kristofferson played for 2 hours with a very brief (maybe 10 minutes?) intermission. He played

He didn't bring a band. Just himself and his guitar and harmonica. It was enough.

At 80 years old, Kris Kristofferson still carries an impressive stage presence. There were a few missed notes on his guitar, and a few missed high or low notes in his vocal range, but his wit and charm more than made up for any shortcomings brought on by his age.

For Kristofferson, it has never been about his singing or his playing. It was always about his music and his storytelling. And he captivated a packed house Wednesday night on stage. He sang love songs and drinking songs and ballads and each one struck the audience as if the story were written and sang only for each of us.

My only complaint is that he apologized too much for any lapses in his musical technique. The audience didn't care. They wanted to hear him sing his stories.

And I'm glad I was there to see and hear it.

Photos of the concert