LBM was formed by Joseph Shabalala in Ladysmith, South Africa in 1964. Shabalala did not make this trip, but a number of his sons still perform with the 8-man group. Westerners learned of their talents in the 1980s when they recorded the classic "Graceland" album with Paul Simon; but they have been touring and recording on their own for decades. Their tight harmonies and blend of African and western music make them appealing to audiences all over the world.

LBM delighted the audience in a too-short (about 80 minutes) performance before a sold-out theater. They blended harmonies and melodies and humor and Zulu dancing to entertain us. There were no instruments because there was no need for instruments. 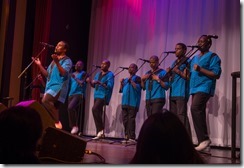 They sang some songs in English and some in the Zulu language. "Homeless" and "Diamonds on the Souls of her Shoes" from "Graceland" were crowd pleasers; but most of the night consisted of traditional African songs and their own compositions. For most songs, a different member of the band would step to the front of the stage to sing lead, while the remaining 7 harmonized behind him. Some songs were accompanied by coordinated Zulu dances.

The night concluded with a stirring rendition of "Amazing Grace".

Ladysmith Black Mambazo has long been on my list of bands to see live. Now I can cross them off the Bucket List. Until the next time they come to town.