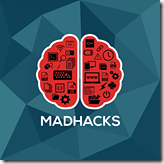 MadHacks is an annual weekend hackathon hosted at the University of Wisconsin in Madison, WI. The organizers decided to move the hackathon from the spring to the fall, which left a gap of nearly 18 months between events. To maintain interest, they decided to host a smaller, 1-day hackathon on April 16. The event was billed as MadHacks Spring Fever. 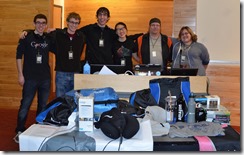 I served as a mentor and a judge at this hackathon.

I also delivered a 1-hour presentation on Microsoft Cognitive Services. 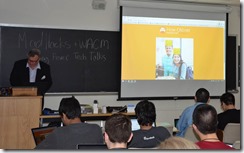 4 judges evaluated all the submitted projects and chose the top 3. The quality of the projects made this difficult and we had to ask several of the teams to show their project again in order to make a selection.

Many of the projects were Microsoft branded, such as Xbox games, Azure books, and Microsoft sleeping bags.

The winning projects were:

The event was organized by University of Wisconsin Microsoft Student Partner Katie Anderson.

The projects created were particularly impressive, given that they were all created in 12 hours or less.

A much larger hackathon is planned at UW-Madison in the fall semester.