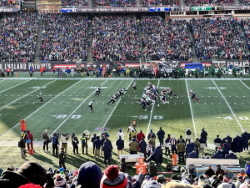 Over 500 miles of driving, three states, four hotels, three museums, one NFL game, a Thanksgiving dinner, many coffee shops, and meetups with friends on multiple days.

That is how I spent Thanksgiving week!

It began because friends invited me to spend Thanksgiving with them at their home in suburban Boston. That seemed like a long way to travel just for Thanksgiving, so I decided to fly out the Sunday before and attend the Patriots-Jets game in Foxborough. It was a sloppy game. The Patriots dominated but their mistakes kept the score tied at 3 until Marcus Jones returned a punt for a touchdown with 5 seconds remaining. Eleven weeks into the season, this was the first punt returned for a touchdown in an NFL game. 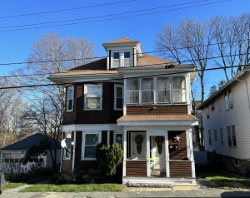 After the game, I drove up near Haverhill, MA - the town in which my father grew up. I visited his childhood home and a couple of cemeteries, but I was unable to find any tombstones with my last name carved on them. During most of Monday, I worked from a Haverhill coffee shop, attending a couple of online meetings and studying Azure security.

I spent Tuesday in Concord, the capital of New Hampshire. This was my first-ever visit to the Granite State. Again, I worked from a coffee shop most of the day; but I did manage two touristy activities: I took a tour of the New Hampshire State House (most states call this a State Capitol) 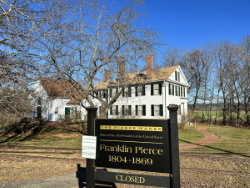 I also visited the home of Franklin Pierce the only US President from New Hampshire. His house is closed until the spring, but it sits on the Merrimack River and is very picturesque and worth walking around the grounds.

Tuesday evening, I drove to Portland, Maine, which was my first visit to this state. My friend Bill and I made plans to meet for dinner with his family at a downtown restaurant. I arrived early, so I sat in a nearby cafe that sold both coffee and cannabis. I consumed one of these items while waiting. I had not seen Bill in years and only a couple of times since each of us moved away from southeast Michigan years ago. This was the first time I met his wife and daughter - a pleasant experience. 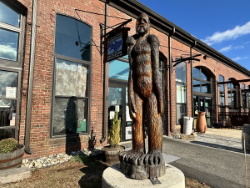 The next morning, I drove around Portland, seeing the seaside park along the Eastern Promenade before visiting the International Museum of Cryptozoology - a bizarre museum dedicated to creatures that may or may not exist. To my knowledge, this is the only museum of its kind in the world. It features exhibits on Bigfoot, Yeti, the Loch Ness Monster, Mothman, and other probably-mythical creatures.

I took a vacation day Wednesday and drove south, stopping in Portsmouth, NH - a town on the Maine - New Hampshire border. I visited a park on the water and tasted an excellent lobster roll at a downtown deli. 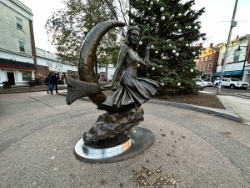 I noticed I was close to Salem, MA, so I decided to make a side trip to see this place, famous for convicting and executing suspected witches in the seventeenth century. Traffic was heavy in the area, so I did not have much time to explore Salem, but I noticed that they do not shy from their reputation. I saw numerous stores that were based on the occult or named after supernatural ideas and a downtown square features a statue of Samantha, the main character of the popular 1960s TV show "Bewitched".

Wednesday evening, I arrived at Logan Airport to pick up friends and drive them to our hotel in Waltham - just west of Boston. We met friends for dinner at an excellent steakhouse nearby, where I ate entirely too much. 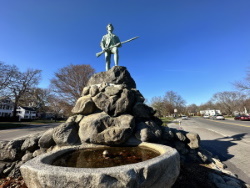 Thursday was Thanksgiving, which we spent with friends in Wayland, just a few miles west of Waltham. Before driving over, I felt compelled to visit nearby Lexington Green - the site of the first battle of the Revolutionary War (The British dominated that battle, but the American Minutemen drove back the Redcoats the next day in Concord.) 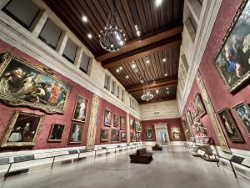 Friday morning, a group of us traveled to downtown Boston to visit the Museum of Fine Arts and the Isabella Stewart Gardner Museum.

I enjoyed each museum, but the latter had an especially entertaining story. In 1990, thieves stole 13 pieces of art from the Gardner collection, including two by Rembrandt. None of the art was ever recovered and the museum displays empty frames where the paintings used to display. 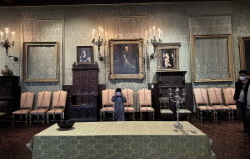 Saturday was a get-together with some friends and their cousins and second cousins and cousins once removed, before heading back to Logan and a flight home.

In addition to connecting with friends, learning some new things, and seeing new sights, I made progress on a couple of my bucket lists. After visiting Maine and New Hampshire for the first time, only 9 US states remain unvisited; and, after seeing a game at Gillette Stadium in Foxborough, I have only 9 NFL stadiums left to visit.

I arrived home exhausted and grateful.

How was your Thanksgiving?