On March 7, Tim Benham and I made plans to meet Dave Bost for lunch. Dave cancelled at the last minute. His e-mail is below. It breaks my heart to read it today.

"I'm sorry guys. I'm going to have to take a rain check. I'm out of commission today at home with a debilitating migraine headache.
I'm really sorry.
How's next week?."

2 days later, Dave was in the hospital and doctors were operating on his brain; 3 days and 2 surgeries later , he was in a coma. He never awoke from that coma.

Monday evening – about a month after he checked into the hospital - Dave passed away.

I don't know his age, but I know he was younger than me and I know he left behind a wife and daughters.

For years, I have been part of the developer community and Dave, in his role as a Developer Evangelist, was charged with helping to build and support this community. But it was always clear that this was never just a job to Dave. He genuinely wanted to help people and to teach people. I never saw him talk down to anyone, regardless of their skill level. He was one of the most personable people I've known. When I think of Dave now, I always think of his smile, his positive attitude, and his relaxed, disarming manner. I think these attributes shine through in this interview I recorded in 2010: /2010/02/10/DaveBostOnTheThirstyDeveloper.aspx

My first week at Microsoft was Dave's last with the company. It was his job to train me. He took the time to show me how he approached the job, where to find everything and what I needed to be successful.  We stayed in touch after he left the company, but we never got together for lunch as we planned.

Tomorrow, Dave's body will be buried and we will miss him and remember how much brighter the world was with him and his smile in it. I’ve taken comfort these past few days in reading all the tributes to Dave and seeing all the photos of him posted on social media by those who knew him better and longer than I did. It’s clear he touched many lives during his time on Earth.

The lessons from tragedies like this are almost always the same: Life is precious; tomorrow is not promised to you; appreciate those around you while they are here. Sometimes it takes a tragedy to remind us of these truths.

When I get home, I’m going to call an old friend and schedule lunch. 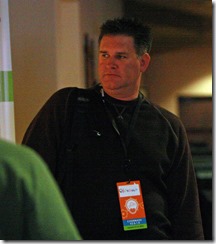