Searching for my Past in Quebec 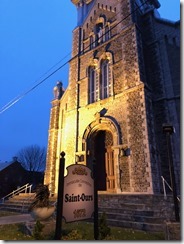 When I was a boy, my grandmother wrote down the names of my male ancestors. This began with my father, who was preceded by my grandfather (her husband), my great grandfather (her father-in-law) and so on. Years later, I wondered why she did not provide similar for her own ancestors, but this question did not occur to me at that time. 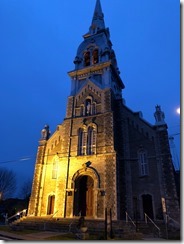 Since hearing about St. Ours, it has always been a dream of mine to visit there. I was in Montreal for work a few weeks ago and a map of the area revealed that I was only an hour from St. Ours.

So on the final day of the workshop, I hopped in my rental car and drove East.

I arrived just before sunset. St. Ours sits on the Richelieu River, so I had to take a ferry to reach it. The town is tiny. It cannot have grown much in the last two centuries. 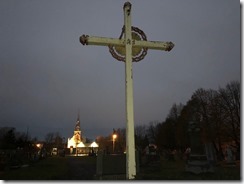 I first found the church and was surprised not to find a cemetery next to it. The cemetery was a block away and the sun had set by the time I arrived. It wasn't large and many of the headstones were well over a century old. I walked around the darkness, feeling the chill of the night air and using my phone's flashlight to read the names carved into marble.  I could not find any Giards, but I did find a number of Girards and Girouards.

After a few photos, I made my way to a coffee shop on the outskirts of town, where I chatted with the lone employee in a combination of his broken English and my broken French. 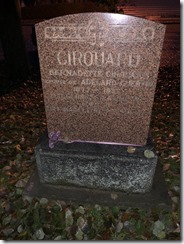 I did not stay in St. Ours long enough to verify it was the home of my ancestors or find records of either of the Francois Giards or their descendent. But I stayed long enough to feel a connection. And, until I return, that is enough.