A few months ago, I decided to spend 2 days in Copenhagen on my way to speak at a conference in Stockholm, Sweden. I had never been to Denmark before and I did not know if I would get the opportunity again.

Little did I know that my opportunity would come so soon. 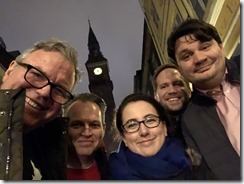 I was asked to serve as the Tech Lead at a DevOps OpenHack in Copenhagen last week and I quickly accepted a chance to return to Copenhagen. I didn't feel I had enough time to explore last time (although I did visit 2 museums and took a boat tour of the canals); and I wanted to see more.

Unfortunately, it is more difficult to see Denmark in December than it is in May. The Copenhagen sun rises at about 8:30 and sets at about 3:30, meaning it was dark when I arrived at work each day and dark when I left.

But I still enjoyed myself.

The OpenHack was a great success. It was my first time as a tech lead, which added pressure, but my friend Hattan helped me prepare for this role and I was ready when the event began. I was also excited to learn more about DevOps - an important part of software development that I had been hoping to upskill on. The final day of the OpenHack, I surprised the audience by singing a song about DevOps that I had composed the night before. It was set to the tune of "Deck the Halls", which gave it a festive feel.

After the OpenHack ended, I met my friend Magnus and his family for dinner. Magnus lives in Malmo, Sweden, which is across the Oresund from Copenhagen. It was good to see him and to meet his family.

The following day, I walked around Copenhagen and spent a couple hours at the Christiansborg Palace, where the Danish Parliament meets. The Palace boasts several museums. I visited the ruins under the palace of the castles that previously stood on the site; and the Royal Reception Rooms, where monarchs host official functions. 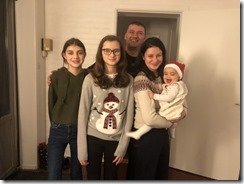 My friend Tibi recently moved to Helsingborg, Sweden and he invited me to stay with his family. So, Friday afternoon, I traveled the 100 km by train to meet him. It was a relaxing weekend with Tibi, his wife Nicoleta, and their 3 daughters, including an 11-month-old with an infectious smile. 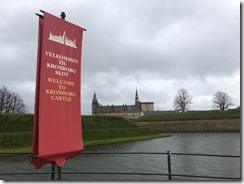 Sunday, I took a ferry across the Oresund to Helsingborg to visit Kronberg Castle, which inspired William Shakespeare to write "The Tragedy of Hamlet, Prince of Denmark" over 400 years ago. If I return in the summer, I would love to see a live production of "Hamlet" performed at the castle. The day was filled with wind and rain, which made the ferry ride rough and walking unpleasant, but which also kept away crowds.

On Monday, I spent the entire day returning home - via car, train, 2 flights, and an Uber ride.

It was not an exciting trip, but it was one that I enjoyed, thanks to the kindness of friends. And I left with a festive feeling.