I was asked to work at an OpenHack in Tokyo, and I quickly agreed to an opportunity to visit this faraway place for the first time.

The OpenHack went well. Attendees learned how to work with data in the cloud and I served as a coach for a team of Japanese developers. It was a joy to work with other smart people and help people learn. I even had a chance to deliver two presentations to the attendees – one on Azure Data Factory and one on Azure DataBricks. 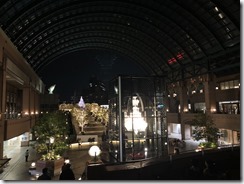 The day prior to the OpenHack, we took a hike through nearby Hibiya Park, which featured two scenic ponds, a fountain, and colorful wildlife.

Until Thursday evening, I was mostly focused on the OpenHack. But I had all day Friday and Saturday (and parts of some other days) to explore this new city and I took advantage. 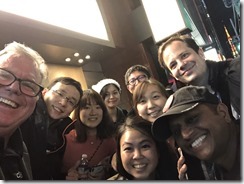 Tokyo is a large urban area with an enormous population, but there are many parks and natural areas within the city. My colleague Madhu talked me into waking up early Wednesday and Thursday morning to visit some shrines in the city before heading to work. It was completely worth it, even though we ended up buying coffee for the team.

Sensō-ji is a Buddhist temple near a market area in Asakusa. Outside the temple is an impressive garden with admirable landscaping and a stream flowing through it.

Meiji Jingu is a shrine dedicated to the spirits of Emperor Meiji and Empress Shōken, who were instrumental in bringing Japan into the Industrial Age in the early 20th century. The shrine is in the center of a beautiful forest in the middle of Tokyo. 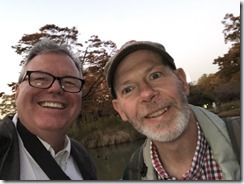 Friday afternoon, I met with my friend Peter. Peter and I went to college together and he moved to Japan about 30 years ago, so I had not seen him in decades. We met by the Shibuya Crossing - an intersection of 6 major roads that allows hundreds of pedestrians to cross in any direction simultaneously when the signal changes. Peter wanted to eat at his favourite nearby restaurant, so he took me to (wait for it) TGI Friday's! It wasn't much different than the American version, but it was good to spend time with Peter after all these years. After lunch, we took a walk around Yoyogi Park, which had some nice fountains and walking trails. 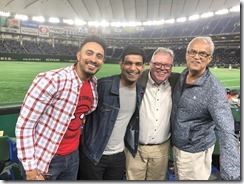 On Friday night, I attended a baseball game at the Tokyo Dome with three other coaches. South Korea easily defeated Mexico as part of the Global Baseball Battle, which featured the top 12 national teams. We sat in box seats down the left field line with the Mexican fans and pretended to be big fans ourselves. 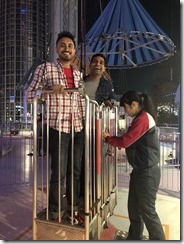 We also went on one of the rides in the amusement park across the street.

Saturday, we went to the TeamLab Borderless - a multimedia museum that features animated projections on walls floors, and ceilings; along with physical objects, music, and uneven floors. It is very much a multi-sensory experience.

Saturday evening, I made my way to Akihabara, known as "Electric Town" because of all the electronics shops. I found a tiny hole-in-the-wall curry place and a Japanese comic book shop and walked through the neon jungle that is this neighborhood before I made my way back to my hotel. 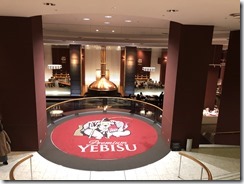 My final day in Tokyo was a relaxing one. I went for a walk around the Ebiyu neighborhood where I was staying. I visited two nearby museums: The Museum of Yebisu Beer and the Tokyo Photographic Art Museum. There were no English language tours at the beer museum, so I walked around the open area and sampled one of their beers. At the Photographic museum, I saw works by this year's national award-winning photographers. I was surprised to notice that some videos were classified as "photography". I spent less than an hour at each museum before making the long trek to the Narito airport for my journey home.

Most people I encountered spoke very little English - this was fair, given that I know only a handful of Japanese words - but they were very friendly. One woman came running out of a coffee shop I had just exited to return a $5 bill I had dropped inside. Another man went inside a train station with us (costing him at least 100 Yen) to point the directions to the train we needed.

Tokyo is a surprisingly clean city, given its size and population density. One almost never sees litter on the ground, even though there aren't many trash cans. People simply don't drop trash on the ground.

This city is much more beautiful at night, when every building is illuminated, which contrasts dramatically with the plain colors of the daytime. The difference is like night and day. 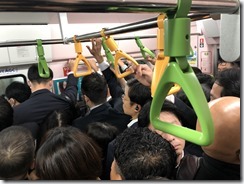 Riding the subway during rush hour can be soul-crushing and body-crushing. People are packed so tight that I struggled to move my arms. During this time, I noticed the other riders seemed to put themselves in a trance - either buried in their cell phones or closing their eyes during the ride. Sometimes it was so crowded that it was impossible to reach or read one's cell phone. On one ride, the train broke down and did not move for 15 minutes; Yet no one complained or even moved.

And the service at my hotel (The Westin Tokyo) was excellent. One example: I regularly sleep with a CPAP machine and I have a pillow at home with a notch where the CPAP mask can rest undisturbed while I sleep. I brought the machine to Tokyo with me and left it by the bed. When I returned to my room in the evening, the hotel staff had provided a notched pillow for me. 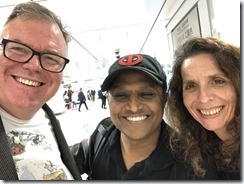 I am grateful to Raj and Omkar and Lisa and Amanjeet and Lisa for spending time with me outside the OpenHack as we explored Tokyo together.

And I am grateful to Hattan for providing me with recommendations of things to do in Tokyo.

I hope it will not take me another 57 years to return. And I am happy to buy more coffee when I do.