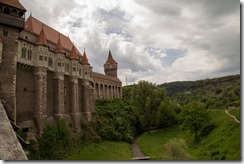 I spoke last year at IT Camp in Cluj, Romania and my friend Mihai invited me back again this year. The IT Camp organizers treated me so well last year, I felt I must return this year.

Getting from Chicago to Cluj was an adventure lasting almost 20 hours. I left Chicago Tuesday evening at 9PM and arrived in Cluj at 1AM Thursday morning (local time).

My itinerary included a 9-hour layover in Munich, so I decided to leave the airport and visit downtown Munich. Luckily, a train runs directly from the airport to the city. Unluckily, the train  was out of service because the local workers were on strike. Luckily, I shared a taxi with a woman travelling to Munich from Heidelberg and she picked up the fare. Unluckily, the weather in Munich was cold and rainy. I had been to Munich a quarter century earlier and I remembered its pedestrian area filled with shops, cafes, and beer gardens. I had lunch and a beer at the famed Munchen Hofbrauhaus and a coffee at a local cafe. But I grew tired of walking around in the bad weather, so I returned to the airport to await the next leg of my flight.

I finally arrived in Cluj around 1AM the morning of the conference. Conference organizers came to the airport to pick me up (one of the many ways they spoil their speakers).

IT Camp was as good as I remembered from last year. In 2014, I was one of three Americans but this year no one else came from the US to speak. I remembered many from last year and they made me feel welcome.  Speakers came from all over Europe. Much of the conference content focused on Security and on Azure and I was able to learn quite a bit from the other speakers. 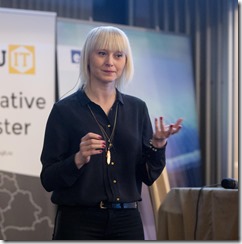 Unlike most conferences, IT Camp opened with multiple keynotes. Organizers Mihai and Tudor kicked things off and quickly introduced the mayor of Cluj, who boasted of the emerging technology industry in his city.  The first keynote was an excellent talk on security by Paula Januszkiewicz, which focused more on human issues than on technology. Peter Leeson returned as a keynoter to talk about Organizational Sociology and Anthropology in Tech Companies. Peter’s talk was also not technical (Peter is a business anaylyst, not a technologist) but was very informative.

My presentation on Azure Mobile Services was well-received, even though one of my demos inexplicably failed. I participated in a Panel to answer audience questions about Azure. This inspired a lively discussion from the audience about some of the challenges of adopting cloud computing.

We stayed at the Hotel Grand Hotel - a 5-star hotel overlooking Cluj; the organizers treated us to excellent dinners every night; and IT Camp has a tradition of taking speakers on a cultural excursion the day after the conference. This year, we all travelled to Corvin Castle for a tour of this castle built in the 15th century. 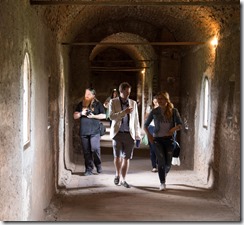 The castle was a 3-hour bus ride from our hotel and we all went for a gourmet dinner in downtown Cluj after returning, which meant that I didn't get to sleep until nearly 2AM. This was a problem because I had to wake up at 4AM for an early-morning flight to Stockholm. My band tracks my sleep patterns and it announced (rudely) that I only slept 93 minutes that night. But I made it and napped on the plane and arrived tired at the hotel in Stockholm, ready for my next adventure. You can read about that trip here.