The MVP team is now part of DX and we are actively working together to connect with MVPs. One step toward this was the

The event was organized by Esther Lee, Rowena Branch, Fernanda Saraiva, Brian Prince, and others.

Registration was capped at 100 and about 90 MVPs attended for 2 days of technical content, roundtable discussion, and providing feedback.

The content was mostly presented under NDA, but a few of the presentations were:
•    "What's Next for Developers?" presented by NuGet PM Jeff Fritz
•    "Overview of Microsoft's Digital Crime Unit" presented by Tim Pash of the Philadelphia MTC
•    "Working with your Evangelist: Understanding DX priorities" presented by DX Audience TE Nick Landry. I really liked Nick’s analogy of Evangelists as sherpas, helping to guide others to greatness (I hope I’m not violating any NDA by repeating that).
•    I gave an overview of Universal Apps.

MVP Open Days have taken place in other parts of the world, but this was the first one in the US. The reception was very positive by the attending MVPs with many expressing a desire to see more events like this in the future.

Another Open Days event seems likely in the future, but the location is currently undecided. 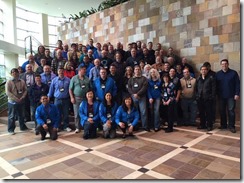 MVPs and blue badges at the US MVP Open Days

Me and Esther Lee – one of the event organizers

Hanging out with some of the organizers after the event