Now in its fourth year, That Conference is one of the premiere developer community events in the Midwest. Most attendees come from the upper Midwest, but dozens of speakers traveled from all over the country to share their knowledge.

Like many code camps, That Conference features classroom-style presentations, an Open Spaces area for interactive discussions, booths for attendees and sponsors to interact, and food (good food!) in a common dining area.

What sets apart That Conference is its emphasis on family. The conference drew 800 attendees and speakers, but nearly 400 family members accompanied them. It was not uncommon to see strollers pushed down the conference hallways between sessions.

Family attendance did not happen by accident. That Conference is held at the Kalahari resort, which features a huge water park - ideal for family activities. The conference even reserved the water park one evening after the normal closing time for the exclusive use by attendees and their families. Best of all, the conference organized a kids' programming track to teach children about software development and computer science in a fun and engaging way. In fact, many of the sessions in this track were delivered by children - usually the kids of attendees or speakers.

I was happy to be a part of That Conference this year - as a sponsor, speaker, and attendee.

As a sponsor, I coordinated Microsoft's presence at the event. Microsoft was the Principal sponsor (the highest level available) and we promoted the theme "Microsoft Is Open" to emphasize Microsoft's support of Open Source Software and non-MS technologies.

As a speaker, I delivered a presentation titled "Microsoft Azure Without Microsoft" in which I talked about how developers using Open Source and other technologies could take advantage of the Azure platform. I organized an open space after my session where I heard how others are using Azure with their own sets of tools. Two people from a nearby open space ended up joining my group.

As an attendee, I sat in on a couple sessions (Wade Wegner's talk on Azure Apps was very interesting), sat in a couple open space discussions, and had numerous conversations with others at the conference. It was great sharing ideas with developers from different technologies and geographies. 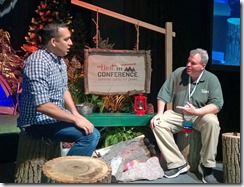 I was excited to be interviewed by both Seth Juarez of Channel 9 and by Jason Young and Carl Schweitzer for their excellent MS Dev Show podcast. I conducted a few interviews of my own, which will be released over the next few weeks at Technology and Friends.

I wish I could have attended more presentations at That Conference, but I came away with some new connections, some new ideas, and a lack of sleep.

My Photos of That Conference