A couple years ago, J Tower and his team noticed attendance at the Grand Rapids .NET User dwindling. This trend was in stark contrast to the annual GR DevDay conference that attracted hundreds of attendees each year.

Tower came up with a novel approach - he discarded the idea of a monthly user group meeting and replaced it with a quarterly meeting that more resembled a conference than a user group. Because the quarterly meeting took place on a weekday evening and was patterned after GR DevDay, he dubbed it "GR DevNight."

Each GR DevNight begins with a keynote presentation delivered in front of all attendees. After the keynote, attendees can choose from among 3 different presentations - each lasting about an hour.

Each GR DevNight is assigned a theme and all presentations relate to that theme. 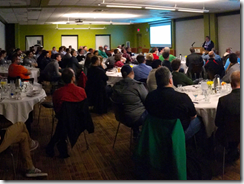 At this week's meeting, the theme was Cloud Computing and I was excited to deliver the keynote address. I showed off many of the Open Source and non-Microsoft technologies supported by Microsoft Azure in a presentation titled "Microsoft Azure Without Microsoft."

While driving from Detroit to Grand Rapids, J called me to tell me that a medical emergency forced a late cancellation by one of the speakers that evening. He asked if I could deliver a breakout session in addition to the keynote. I had been working on a presentation about Azure Mobile Apps so I offered to premiere it that evening. 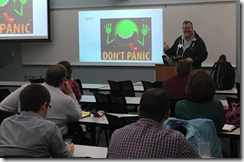 It was an excellent event. A hundred attendees packed into a room at Cornerstone University to hear the keynote and they split pretty evenly between the three breakout sessions.

If you run a user group that is struggling to maintain interest month in and month out, a model similar to this might help you to revitalize your group as it did for the the group in Grand Rapids.