This was my first time at DevSum and my visit to Sweden. In its tenth year, the conference topped 600 attendees. I was surprised by the number of speakers from America, but this fact was a big help to me because many of the Americans introduced me to other speakers, allowing me to expand my professional and personal network.

Patrik Löwendahl, CTO of Avanade Sweden, kicked off the conference with a thought-provoking talk about the challenges facing the software industry. 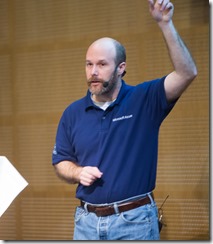 I had a chance to see a few other presentations, including Mike Wood's Azure tools talk (condensed to 50 minutes from its usual 90 minutes); a security presentation by Niall Merrigan, in which he pretended to hack into a bank; and a very entertaining rant by Hadi Hari about "Silver Bullet Syndrome" in which he warned that there  are no easy solutions (such as new frameworks or methodologies )to software problems.

Monday afternoon, I gave a talk on Data Visualization. It's a talk I've given many times before, but I added a few new slides for this presentation and it was very well received. Several people approached me after to tell me they enjoyed it and learned from it.

I also was able to squeeze in an interview with Mark Rendle about the new features of C#. 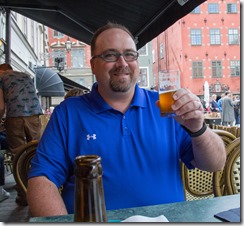 I spent a lot of time walking around Stockholm. The day before the conference, a group of conference speakers went to the Vasa Museum, which tells the story of the 17th century Swedish warship inside that sank on its maiden voyage and was recovered 3 centuries later. Tuesday afternoon, Chris Woodruff and I explored Old Town - the oldest part of the city - and took a guided tour of the Nobel Museum.

Wednesday, Jimmy Bogard and I spent the entire day walking around Stockholm. We toured the museums of the Royal Palace and we visited Skansen - an open air museum, featuring reconstructed buildings from various periods of Swedish history and animals from all around Sweden.

Thursday, I bought a pass for the tourists buses and boats. The bus drove around the city while a recording described each landmark as we passed, telling a bit of the history and culture of the landmark. The boat ride gave a similar tour for the waterways around Stockholm. The city is located on a waterway containing an archipelago of over a hundred islands. These tours gave me a brief overview of the city highlights and also provided respite for the blister that had formed on the bottom of my foot. Following the tours, I went to the Gondolan - a restaurant suspended hundreds of meters above Stockholm that provided spectacular views of the city; then to the Photography Museum, where I saw 4 excellent exhibits. I ended the day, sharing an excellent meal with Ward Bell, Julie Lerman, and Julie’s friend Tricia. 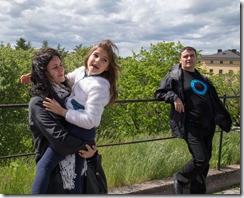 Friday I took a train to Uppsalla, a university city north of Stockholm, where Tibi Covaci and his family met me and we explored the local church - a beautiful building from the 15th century and walked around the town. A local priest told us that university students were graduating today and that we could expect to hear cannons firing in their honor.

Friday evening, I went for a long walk north and west of my hotel - a neighborhood I had not yet explored. It was good to explore the city, even though I got lost a couple times.

This was, by far, the farthest north I've travelled in my life. The daylight hours in Stockholm are surprisingly long this time of year. The sun rises at 3:50AM and did not set until 9:40PM. This is part of the reason I did not get as much sleep as I should have.

I will carry this trip with me the rest of my life. I visited with old friends, saw a new part of the world, and met many smart people.