The Inaugural TechBash brings developers to another Kalahari

In the beginning,there was CodeMash - a small Tech Conference at the Kalahari Resort in Sandusky, OH. CodeMash was a developer conference run by volunteers, but it had a twist. The Kalahari features an indoor water park, so attendees could slip away to enjoy the water slides or bring their families, who would enjoy the water park while they attended sessions.

CodeMash was successful enough that some folks in Illinois and Wisconsin created a similar conference - That Conference - at the Kalahari in Wisconsin Dells, WI.

Last year, a Kalahari opened in Pocono Manor, PA, so naturally someone had to create a tech conference and host it there.

The inaugural TechBash took place September 28-30 at the Pocono Manor Kalahari and I was honored to be a part of it. I delivered 2 presentations: "Adding Image and Voice Intelligence to Your Apps with Microsoft Cognitive Services" and "Building Powerful Applications with AngularJS and TypeScript". The classroom was completely full for the latter talk.

Speakers came from all over the US and one - Iris Classon - traveled from Sweden to present.

With a limited budget, the organizers did not have a lot of frills at this conference. Meals were simple and after-hours events were limited. There was no bacon bar or giant-size Settlers of Catan game, as we've seen at the other - more established - Kalahari conferences. But the content was excellent and I heard positive feedback from many both attendees and speakers.

At 170 registrants, TechBash is about the size CodeMash was in its first year. The organizers announced their plans to host TechBash 2017 and plan to grow it in attendance and scope. 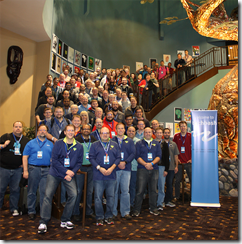